Here's a closeup of the touring rig I used for 30 shows with Hall and Oates in 2021. Thanks to my tech Bill Lanham for filming this at soundcheck a few days ago.

What i meant to say at 7 seconds in was "one of the best rigs that I have put together" not of all time.....haha...

Here's a breakdown of the whole set up

I like using 2 amplifiers for several reasons. When you are playing big venues like arenas, amphitheaters etc….you really need to have an instant backup on stage in case one of the heads go down in the middle of a show (which has happened before!).

Also the amount of choices that you get with having 2 different tonal pallettes is really inspiring and good for different songs, or perhaps you might have a strat style guitar through one amp and humbucker through another without having to change settings.

To pull this off I use a really clever head switcher made by Mesa Boogie called a “Head Track”. This allows me to switch amp heads and use the same speaker cabinet. It also has a really useful effects loop that enables me to run the same effects into both amplifiers loop.

The reason I don’t like to use 2 cabinets live is the phasing effect that happens when you are using in-ear monitors (as I sometimes do). It’s also much easier on the sound man. He will thank you for it.

2 12” Warehouse ET65 speakers. I’ve found that the Fuchs is super picky with speakers and this is the best one I’ve found. It also works really well with the Soldano.

SIGNAL CHAIN IS AS FOLLOWS….

90% of the time I am using the overdrive from the amps themselves rather than pedals, though the King of Tone does sound really good and nowadays there are so many great distortion pedals. For me personally, I just love the feel of amp overdrive.

Fulltone Octafuzz for Octavia effect but also use fuzz for overdrive.

King of Tone is used sometimes as an alternate lead boost or crunch on the Fuchs clean channel.

RC Boost is used mostly with my strat style guitars or to give more grit to clean sound. 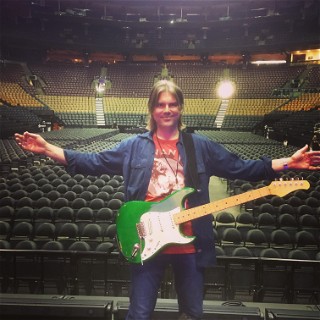